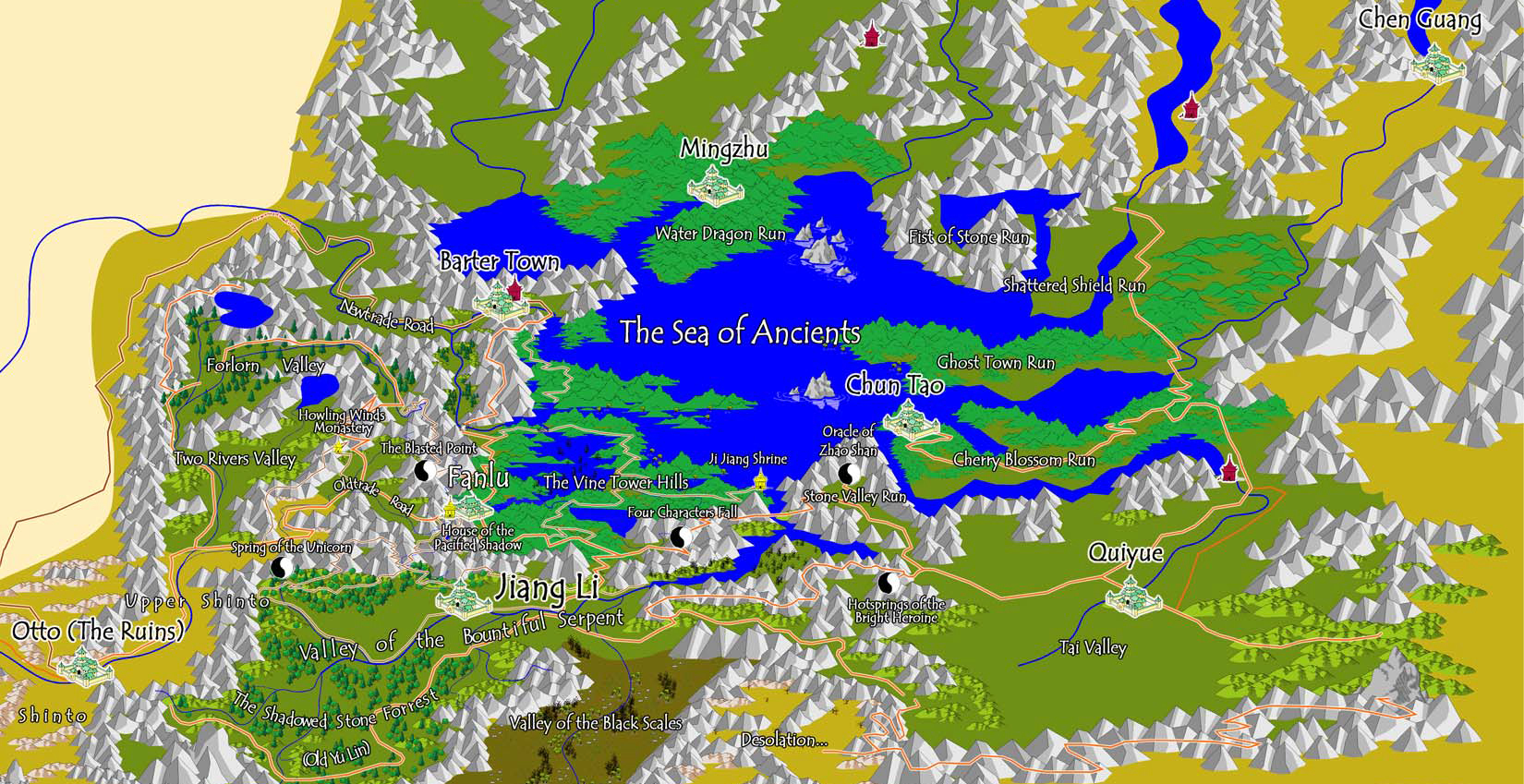 Yunshan is a realm of immense beauty and enduring mystery.  Towering mountains of grey and green rise above it’s secluded valleys and forests. Sheer cliffs soar over mist filled ravines and countless streams cut through the lush, broken landscape.  Rivers plummet down, waterfall by waterfall to form slower bodies of water that flow lazily between massive vine covered spires.  Most flow to a central sea of crystal clarity, The Sea of Ancients.  Monasteries and ruins built in a different age stand vigil high on the windswept peaks and rise at the edge of deep mountain rifts. Many were built long before the past was recorded by men.  Yunshan is place of deep histories, of dynasties built upon the bones of dynasties.

Travel would be impossible if not for the waterways and dozens of white stone roads that wind through the mountains.  These roads are a mystery.  No one knows who built them. They seem untouched by the passage of time, a mysterious and useful remnant of an unknown people time forgot. The white roads are wonders of engineering, hugging the steep ravines, cutting through dense forests of bamboo and pine, spanning rivers on graceful arched bridges.

Bits of flat land are set like fertile green shelves among the mostly uneven landscape. Some hang from the edges of mountain sides.  Some stretch along the banks of crystal clear mountain lakes where huddles of half drowned mountains rise above towns of colorful pagodas. These are the homes of Yunshan’s most famous inhabitants, The People of the Mists. 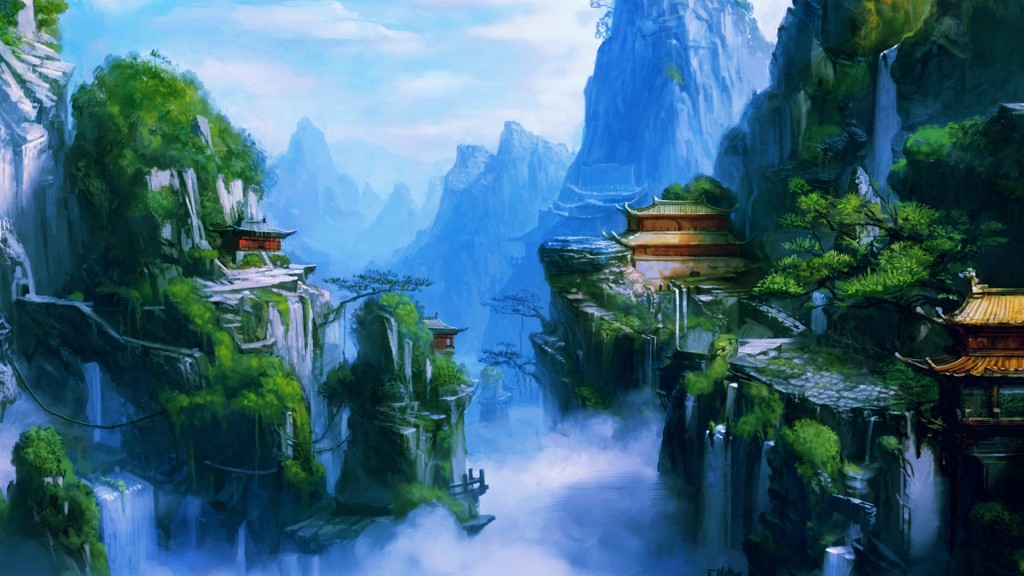 To those who’ve never been to Yunshan, the People of the Mists are an enigma, a people shrouded by rumor and speculation.  For hundreds of years their mountain settlements lay separated from the rest of the world, and old storytellers would speak about the magical blooded people of the mists in tones of wonder…that they could vanish in fog, live forever, and soar between the peaks of their realm as easily as a man might jump over a puddle to avoid getting wet.

Then, the old trade routes into Yunshan were opened again. Bold merchants and explorers came looking for wealth and answers. What they found was more wondrous than they had heard.  There was a deeper power to this place. The land itself was alive with magic. The trees, rivers, and mountains were possessed by sentient energies, the people of the mist simply called them spirits, and they preyed to them in the same manner they would prey to their gods. 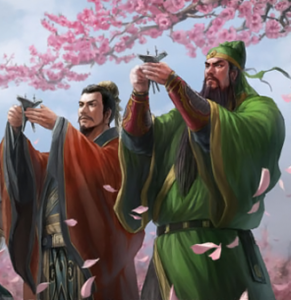 The first merchants who came to Yunshan found it’s people to be more superstitious and odd than anything  In time they discovered the superstitions of Yunshan’s peoples were not superstitious at all.  They were the practical ways The People of the Mists thrived in a land suffused with strange magic and powerful spirits!  In Yunshan, the dead are listening, the rivers have a will, and the mountains watch over the settlements below them like still, silent guardians.  Woe to the prideful foreigner who ignores the “superstitions” followed by the locals!  Such a man will eventually find himself plagued by a magical curse or face to face with an angry spirit!  Powerful beasts, only distant legends in other lands, stalk the back country, and the spirits of the restless dead haunt the wilderness at night.  Yunshan’s people have learned to live in two worlds at once, the practical one, and the less seen but very real spiritual world.

New comers to Yunshan would see and hear many strange things, and soon it became obvious it was not their imagination.  In Yunshan, the vale between the land of the living, and the magical realm of the spirits is thin.  This is how the locals explain the magical nature of their strange land. In Yunshan, the earth, the heavens, the underworld and the realm of spirits meet together in one living dream.  Here the dead are treated with as much import as the living.  People worship their ancestors and pray to them for guidance.  The dead are not just a memory. For good or bad, they move among the living, mostly unseen, but able to change a mans destiny.

Long ago, the People of the Mist were ruled by others, but they fought a long rebellion to gain their freedom. Those who had helped to win this freedom became part of 6 newly formed clans, each with it’s own region.  These high clans, took the most beautiful and fertile parts of the realm. Those who had not helped the rebellion were labeled as Nozufoo…outcasts…road people.  They and their descendants became landless gypsies, traveling among the newly formed clan lands, or else left and settled in the more dangerous parts of Yunshan.  These dangerous places were called the troubled lands. The Troubled Lands were the bandit infested parts of Yunshan that hadn’t recovered from the ravages of the rebellion. 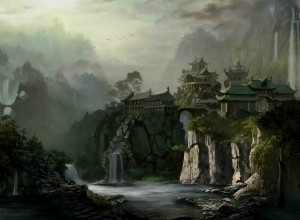 Most of Yunshan’s Nozufoo, or Nozu as they are often called, live near the western side of the Sea of Ancients. When foreigners began to come to Yunshan, it was the Nozufoo they first made contact with.  There are hundreds of 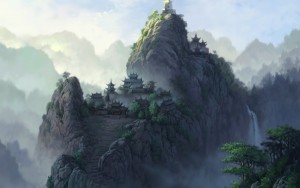 towns and villages of these outcast mist people.  Through great struggle they’ve managed to build lives in the troubled lands, laying roots in the places the high clans deemed too dangerous to settle.  The Nozu have accepted foreign explorers and merchants with open arms, and many have become merchants themselves.  Nozufoo “merchant clans” control the routes between western and eastern Yunshan.  They’ve become the middlemen connecting the reclusive high clans with the outside world.

In recent times, more and more foreigners have come to western Yunshan, to trade, to find opportunity, to escape persecution of their homelands. Once only tiny villages dotted Yunshan’s western valleys, but now the two most accessible Nozu settlements have grown into boom towns.  Some towns in western Yunshan have as many foreigners as Nozu. These settlements have become true melting pots.  The largest of these Nozufoo settlements has become a sprawling city in it’s own right. The first merchants who came to trade with Yunshan’s Nozu clans named it Bartertown.  Its practical minded citizens have seen no reason to change the name.  Most strangers coming to Yunshan are headed towards Barter Town.  They come seeking fortune, opportunity, or a place to disappear from a haunting past. 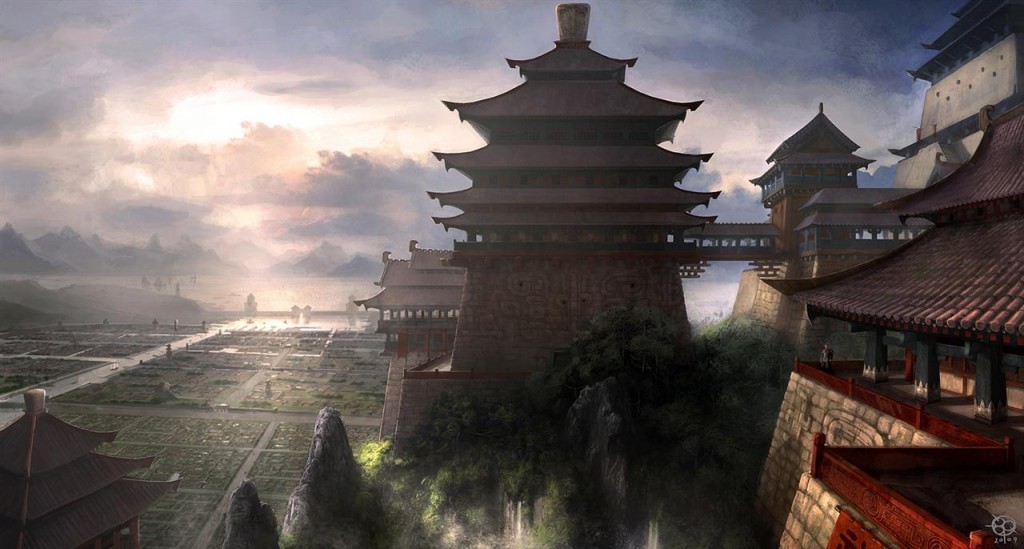 In Bartertown many kinds and creeds live side by side.  The mysterious People of the Mist, tread with grace and 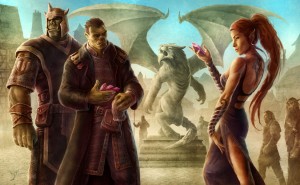 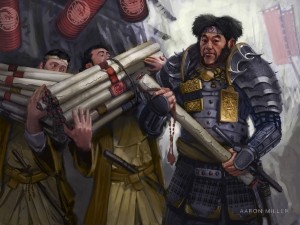 politeness even in the rudest parts of town.  Among them hobgoblin salt miners, orc merchants and fishermen, and much stranger races, exist in some kind of impossible harmony.  The more bestial citizens of Barter Town would be assumed evil in other lands, open to attack without question, but here, they are the citizens of a free city.  Somehow, Bartertown has become a city of the world’s outcasts, and a powerful center of trade.

Barter Town is the gateway to Yunshan.  All with something to offer are welcomed within it’s walls.  It is what one has to offer that matters most in Barter Town, not from where they came.  Each race brings a bit of its old traditions with it, and holds to these like treasured parts of their identity.  The city a colorful place of different, sometimes contradicting cultures crammed together. Citizens of Bartertown are used to strangers from different lands and have learned to give others wide birth of behavior.

The people of Barter Town often ease their differences with light-hearted ridicule.  Colorful comments delivered with swagger are common.  There are lines, 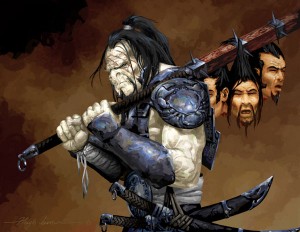 and insults delivered without jest are exactly that, but hurling racial insults and cultural critiques has become an art form in Barter Town, a variety of comedy that brings its disparate peoples together. Being called a smelly cave born idiot or an ugly hairy shit kicker is likely the start of a fine evening for a Hobgoblin ordering an ale.  Such casual insults are typically shrugged off or followed by a counter insult of great imagination.  Some have nicknamed Barter Town the City of Slights..Folks in Bartertown have thick skin.  Those who don’t wind up in rumbles until they end up dead or wiser.  Locals just smile in amusement as foreign fops draw blades and throw down gauntlets over a perfectly fun insult…the people of Bartertown are tough, and the city has some of the worlds toughest street and pit fighters, many of whom make a sport of baiting hot headed mercenaries and caravan guards into fights they can’t win. 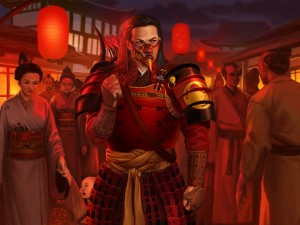 Higher in the mountains and further east are the Clan Lands. The Clan Lands are like places out of time, separated from the outside world by terrain and centuries of self imposed isolation.  Each is like a living time capsule, a window into a more civilized past.

The people of the High Clans live in walled settlements, generally surrounded by farmlands and smaller villages. These settlements are clean, idyllic and well organized.  Even the smallest village will have things the outside world has forgotten. Running water collected in elevated cisterns and sanitary practices makes disease rare. Irrigation, crop rotation, and agricultural management is so efficient and mastered that starvation is almost unknown among the High Clans.  Advanced government with highly organized record keeping and analysis allows the Kijun Lords and the Bureaucracies of the High Clans to govern effectively.  Those who live among the Clan Lands know a peace, stability, and order that is the envy of the world.

Each of the six High Clans is independent.  Each has it’s own land, and governs it’s own affairs  in the way it sees fit.  Each is surrounded by an expanse of wilderness, and long held treaties forbid each clan from expanding it’s boundaries.  There is a peace between the clan lands that has lasted for 300 years, a kind of peace that is unknown in other parts of the world. 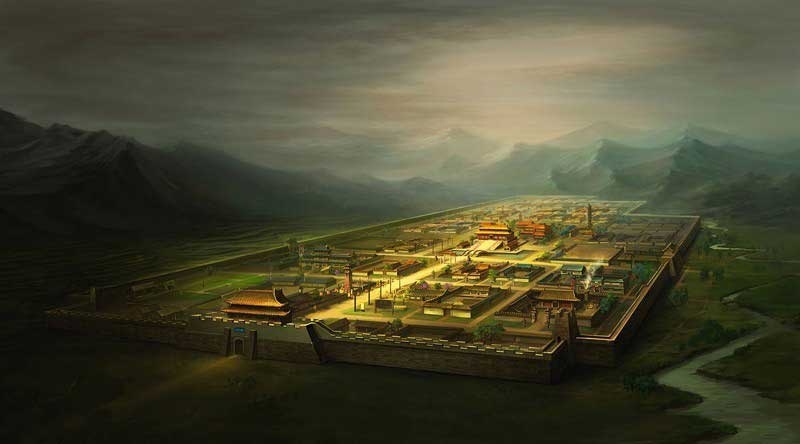 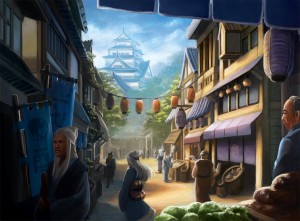 Nozufoo mist people are odd but approachable, but those who belong to the High Clans can be downright strange.  Though they live in the most peaceful parts of Yunshan, these are also some of the most spiritually active places.   For the people of the High Clans, the traditions and rituals that maintain the balance between this world and the spirit realm are a part of almost every action.  The few foreigners who’ve visited the Clan Lands found its people difficult to understand.  Their actions seem determined by rigid codes that sometimes seem ridiculous.  The high clans people are incredibly noble and civil, masters of complex manners, yet very difficult to interact with at first.  At one moment they may seem at ease and even humorous, but become direly offended if a proper tradition is not observed, and immediately forgiving if the proper penance is offered.  Their behavior can seem maddeningly obsessive and ritualistic to one that does not understand their culture and the reasons behind their rigid customs.

The High Clans know they are very different from the rest of the world.  They are issolated but not completely ignorant.  Still, they have little patience for foreigners who come to their lands without knowledge and respect of their ways.  Those who visit can get into big trouble quickly unless they have a knowledgeable guide and can be on their best behavior until they learn at least the basics of how to behave among the High Clan lands.  Those who have taken to the time to befriend one from the High Clans have found a friend for life, one who possesses some of the finer traits in life, but it is not easy to do so. 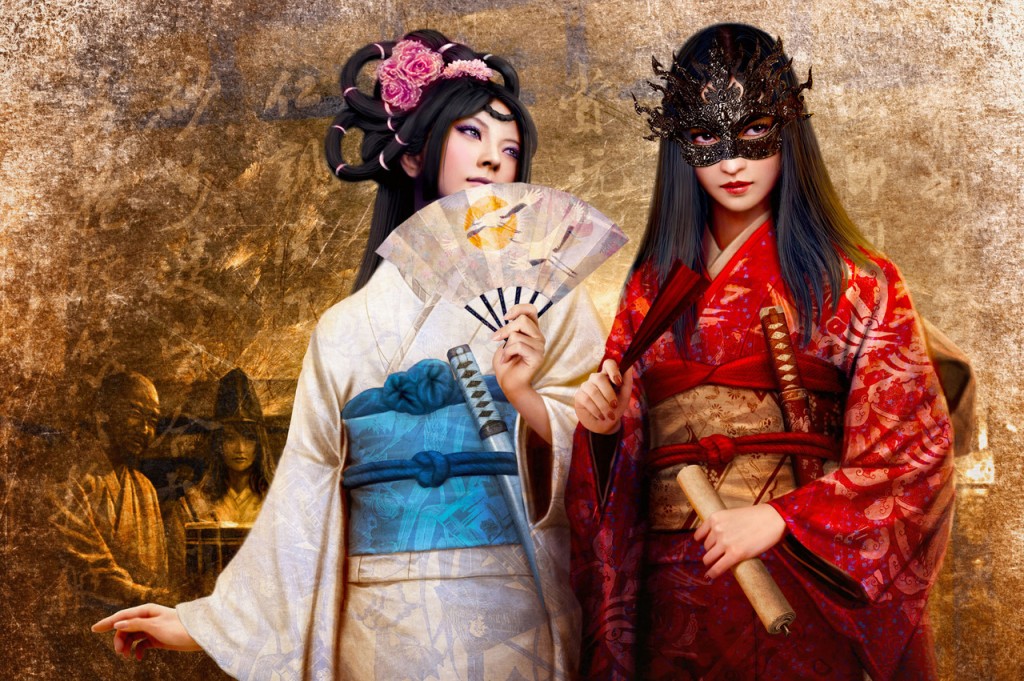