The Home of the Founders 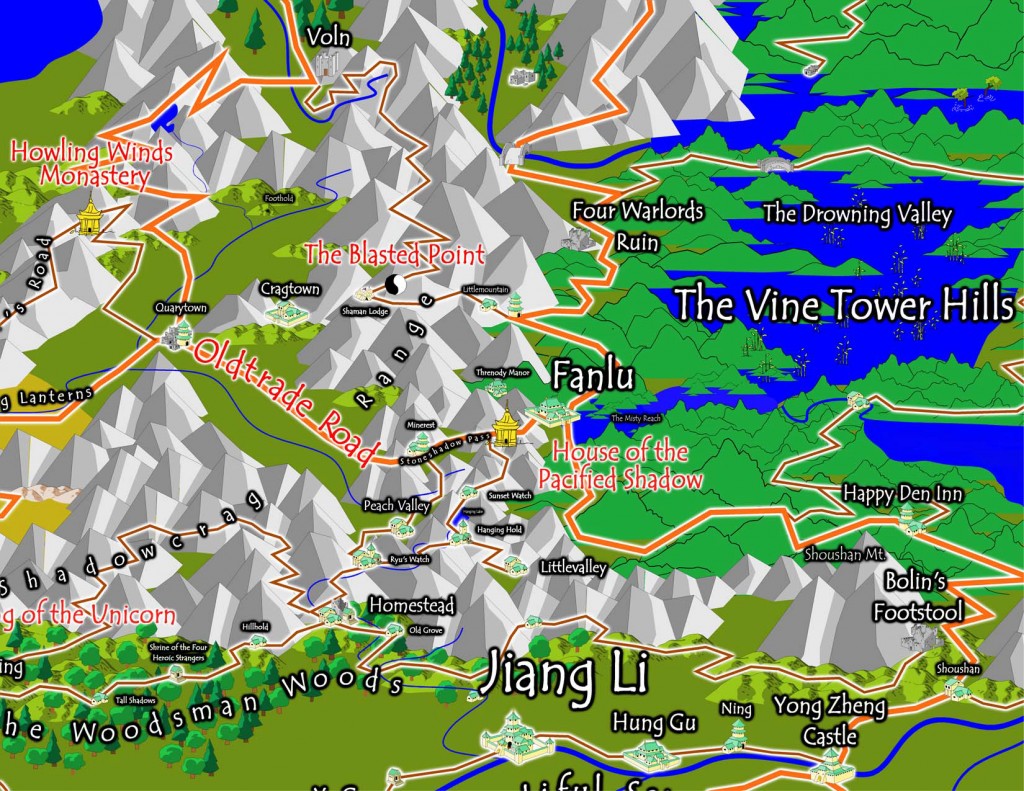 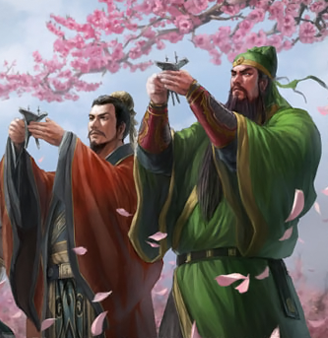 Mayor Yoritomo and Evon on founders day, paying tribute to those who gave their lives in the building of Fanlu

Nearly 80 years ago, Fanlu did not exist as a booming settlement.  It was a haunted ruin, the stony remains of a sprawling ancient fortress and a vast network of catacombs beneath it.  This Place was Called Lei kun (LEE COON). Through those years it served as a base for all sorts of undesirables, the most famous and sinister of whom was the wujen Magori (mag-or-ee).  In those days Magori forged an alliance among the humanoid tribes that live on the western edges of Yunshan.  With fear and promises of power, he cemented them into an army. For a few short years his minions raided and terrorized with impunity.  Some thought Magori might even establish a kingdom of his own in the west of Yunshan…But a band of heroes arose to face him, and the tides turned.  This band of heroes would come to be known as The Founders.  They put an end to Magori’s rising kingdom of fear, and to his life.

The Founders, several of whom belonged to The Brotherhood of the Southern Route, earned their name.  They settled in the Ruins of Lei Kun and made it their own, built houses, stables, and farms for themselves. They called their newly won home Fanlu (Fan-lou), which means the place where 3 roads meet. For decades Fanlu was an odd collection of allied homesteads built in and around the ruins of Lei Kun, but in time others would come to believe in The Founders vision of a free town, a safe haven for all who would travel The Southern Route.  The Brotherhood dumped great sums into the fledgling outpost, building warehouses, stables and Inns.  Craftsmen, merchants, and outcasts of all kinds came from all over Yunshan looking to start a new life.  Now Fanlu is now a booming settlement, a large town in its own right well on the way to calling itself a city.

Lay of the Land 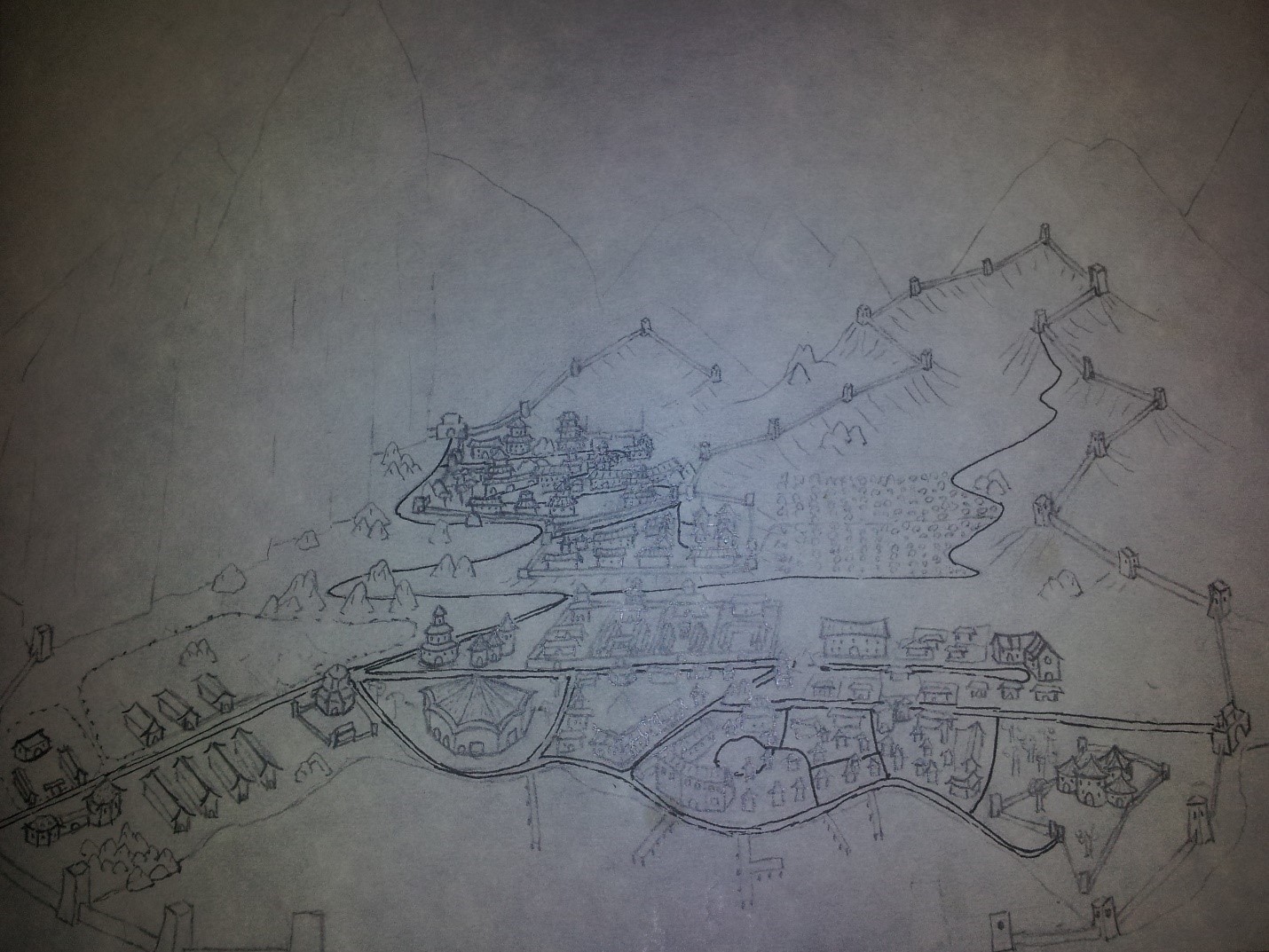 A sketch of Fanlu looking west, so bottom of the sketch is east, right side is north, left side is south

Fanlu is built upon a slope.  The eastern, mostly level part of town has one long continuous dock, and sits at the edge of a narrow lake that snakes deep into the Vine Tower Hills further east.  This Lake is called The Misty Reach, and it eventually connects to a much larger lake called The Drowning Valley. To the west the land slopes upwards steeply until suddenly dropping off about 500ft into a canyon.  Along the edge of the drop, winds an ancient wall dotted with towers.  This wall was part of the original Fortress of Lei Kun that was never taken down.  It is overgrown with vines and in great disrepair.  From atop one of its weather worn towers, one can look back east over Fanlu and the lake beyond.  If one looks west, they look out over Stone Shadow Pass, and the Shadow Crag Mountains.  Directly west, the highest tower of the House of Pacified Shadows can be seen peaking between the jagged spires of rock.  Looking a little bit more northwest, the range that holds the Howling Winds Monastery is slightly visible between the Shadow Crag Peaks. 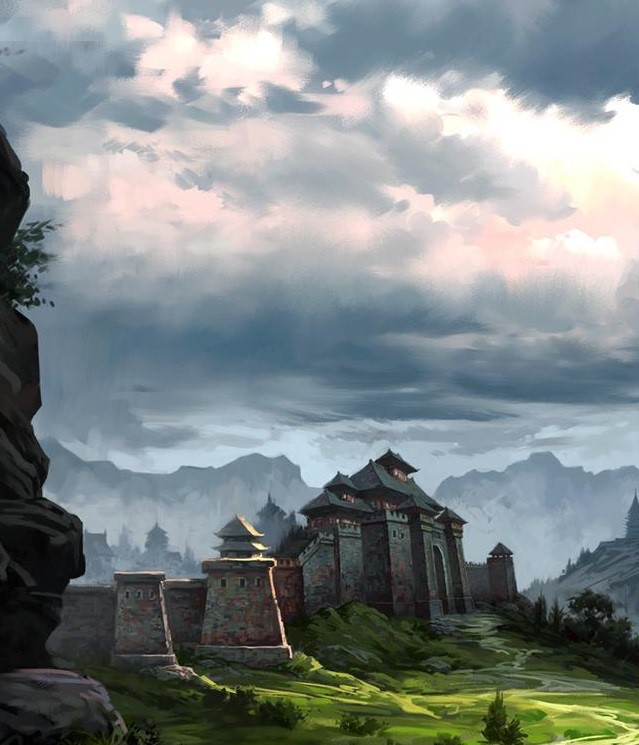 Fanlu’s southern border is the massive cliff face of Old Black Stripe.  Here, rather than dropping away as it does in the west, the land instead shoots ever higher in a dramatic sheet of stone.  At the farthest south east part of town, the rock face ends, and there’s a narrow strip of land between Old Black Stripe and The Misty Reach.  That’s where the trade road heads south and ever upwards, through the Vine Tower Hills and beyond to the mythical Clan Lands.  This is the road the Brotherhood of the Southern Route takes to reach Fanlu.  Here, another section of ancient wall, 30 feet high blocks this narrow gap of land so as to protect the town.  The wall is anchored to Old Black Stripe itself on one side, and extends two hundred feet out into the lake, sheltering the southern side of Fanlu’s little harbor.  This wall was repaired and strengthen by the Brotherhood at great expense.  The two towers which make up its gate house are the closest thing Fanlu has to a castle.  20 riders of the brotherhood are permanently stationed here, theoretically ready to rapidly respond to any internal or external threat.

The North of Yunshan is shielded by another section of wall, which also juts out into the water to shelter the Northern side of the Harbor.  This wall winds up through the hilly west and joins with the wall there.  This section is currently being repaired.  The road to Littlemountain and Bartertown winds north from here between two sturdy stone towers the Brotherhood refurbished and strengthened.   North of this wall is a swampy expanse of land, where the Misty Reach sort of wraps around the North side of town.  This swampy land outside the wall has grown into a village in its own right.  Hundreds of people live here, sometimes for years, as they await permission to move into Fanlu.

Fanlu was built atop the ruins of a much older settlement, a fortress called Lei Kun (lee coon).  Lei Kun was the first of many planned settlements the Tein’Ming built when they settled Yunshan 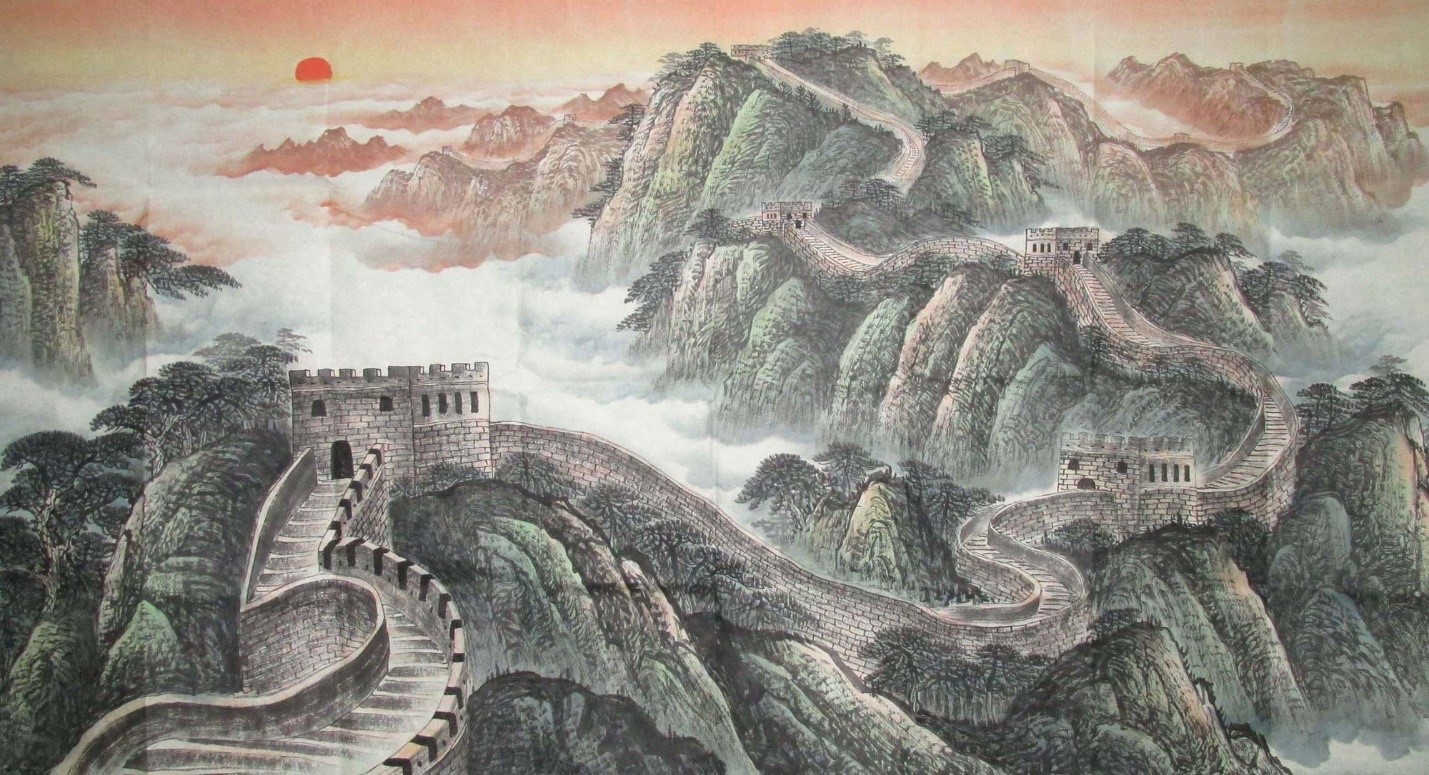 The old walls of Lei Kun still stand along the high hills where the land drops away on the west side of town.  It sat at the top of the Oldtrade road.  During the Tein’Ming and Shinto Dynasties it was literally the gateway to Yunshan.  In time, both dynasties would fall, the Oldtrade road would be closed, and a new trade road, further north, would be opened.  Lei Kun would be destroyed and abandoned, and Bartertown would rise up as the new gateway to Yunshan.

Fanlu was born of a dream.  The Ruins of Lei Kun were a dangerous place, a haven for bandits, evil spirits, and monsters.  Most travelers would steer far clear of Lei Kun, but for the merchants of The Brotherhood of the Southern Route, Lei Kun was a road block.  To get their goods to Bartertown the brotherhood caravans had to go past the ruins.  For years they dreamed of clearing them out.  If they could build an outpost there, they could run caravans up to Bartertown.

In those days an evil wujen named Magori came to rule over the ruins, served by a vast host of evil allies.  A brave group of heroes defeated Magori and a few aspiring members of the Brotherhood saw a chance to change history.  They pulled their wealth together to hire the same band that had defeated Magori.  They issued a challenge; 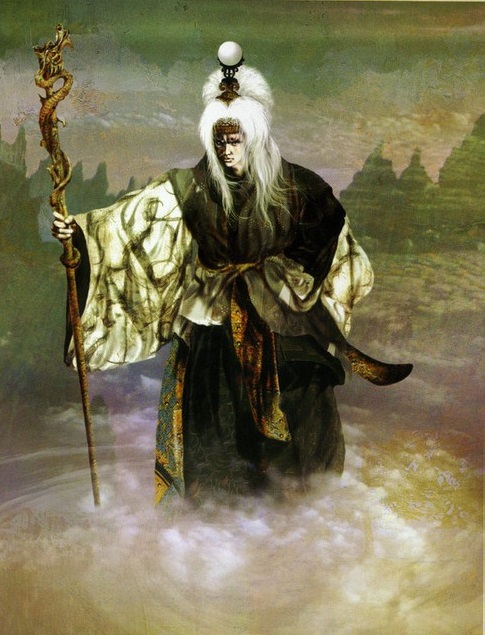 An Artists Rendition of Magori…Painting is a highly evolved art in Yunshan, and portraits of famous individuals both heroic and vile, mortal and supernatural are highly prized. Such art is worth great sums, and both sought after and protected by wealthy orders.

“Let us finish the job!  Clear out the dark heart of these cursed ruins, drive away the evil remnants of Magori’s hosts who still shelter here.  You know they wait to boil out and spread evil again should we leave this job undone.  Let us clear out Lei Kun, and let us turn this cursed place into an outpost for mankind…a safe haven for merchants and pilgrims, and anyone who would travel the Southern Route”

These the words of the man behind the mission, a merchant of the brotherhood named Yoritomo.  These merchant-warriors strapped on their blades and went into the ruins alongside the heroes, eager to do some of the work themselves.  They were risking everything they had, lives included, to achieve something truly amazing, to change the map.  Together these bold men born of humble beginnings, joined forces with the heroes who defeated Magori and cleared out the Ruins of Lei Kun.  They would be known forever more as the Founders.

Among the Founders were Grey’s parents and uncle, Evon, Kito Tai Shan, and Yoritomo.  They did indeed finish what they started, driving out the humanoid tribes and their wujen masters. They cleared out the ruins, and made them safe for settlement.  As a reward for what they had done, the Brotherhood of the Southern Route awarded them large pieces of land in the fledgling settlement.  Some sold this land and moved on, but many of the heroes built homesteads and settled down in the new town of Fanlu.  As the founders where building their homes, so too the Brotherhood was building stables, warehouses, watchtowers and roadhouses. In less than a year, Fanlu grew into a little town of several hundred, and it stayed that way for many years… 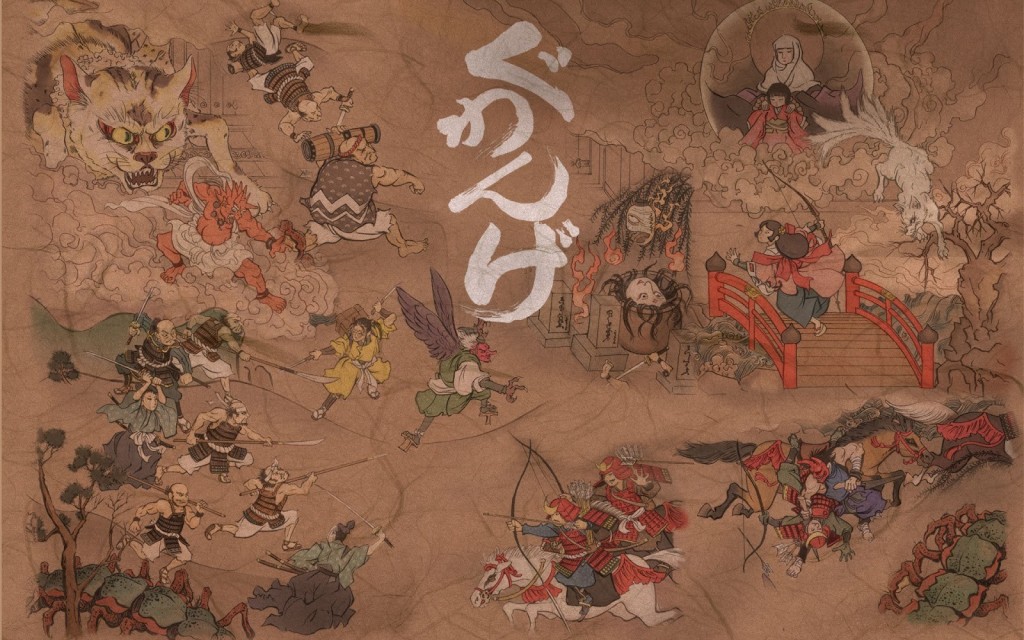 Magori opens a gate to the underworld, unleashing hell on the Founders in a final bid to save himself.

The Gateway to Yunshan in those days was The Newtrade Road, which led up a long pass through the western mountains to Bartertown.  All trade that went in or out of Yunshan passed through this narrow point.  But the Newtrade Road was not the only way to get goods in and out of Yunshan.  There was an older route, known coincidentally as The Oldtrade road.  This route connected with Fanlu at its western gate, but it was haunted, and so dangerous that reopening it was considered impossible. The Brotherhood knew if they could reopen it, they wouldn’t need Bartertown anymore. They could finally build their empire of trade, no longer under the thumb of the northern merchants.  It took nearly 70 years of careful planning to accomplish.  Many pieces had to fall in place before it was possible. 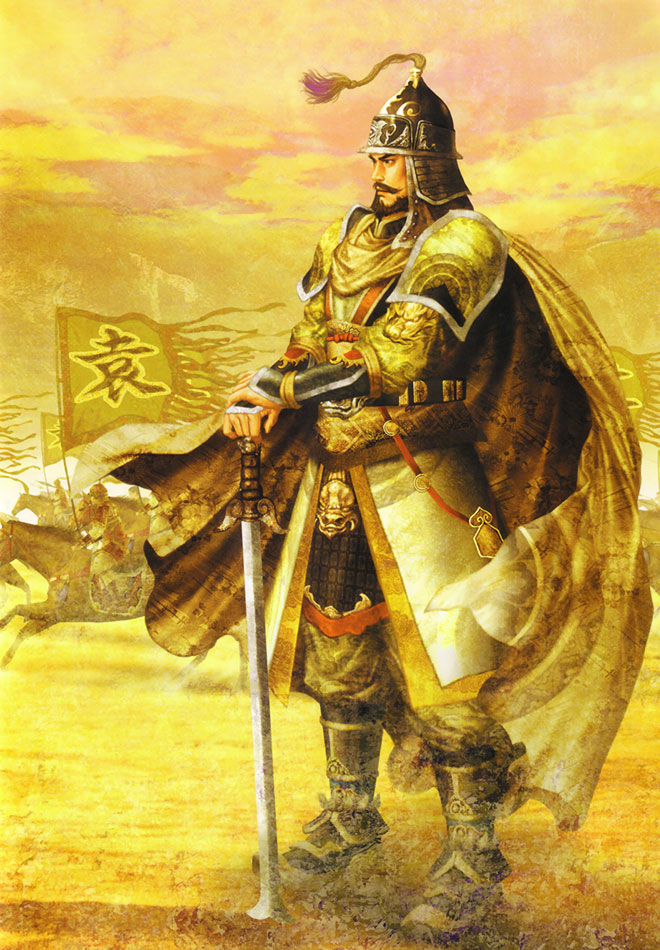 During that 70 years, King Ottomi was born, and would build his city of Otto (Oh-Tow) at the far west end of the Oldtrade road.  He united the clans of lower and Upper Shinto, and the Notari (No Tar-ee) horsemen of the plains further west, bringing a sort of order to those lands.  During the same years, The House of Pacified Shadows grew from an obscure shrine to a powerful order that could field hundreds of warrior monks.  Ottomi brought some order to the western lands the Oldtrade road passed through, and the warrior monks did the same for the eastern end. It took a complicated set of alliances, treaties, and circumstances, far too complex to describe here, but the Brotherhood of the Southern Route did the unimaginable, they reopened the Oldtrade Road, and thus a 2nd route into Yunshan.

This changed everything.  The Brotherhood no longer needed to do business with the northern merchants or Bartertown.  Their little outpost of Fanlu grew into a boom town, from 200, to 1000, and finally to 7000 nine years after the pass was first opened.  There is much more to the history of Fanlu. Many ups and downs along the way.  Many fortunes and misfortunes.  Many mysteries and legends to its past, but these remain to be discovered.