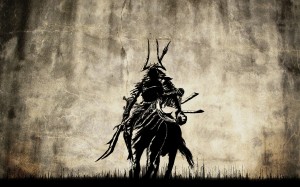 -The House of Pacified Shadows

-Old Narrows is a threat to those who travel along the Stone Shadow Pass during flash floods.  The house of pacified shadows is always having to deal with him 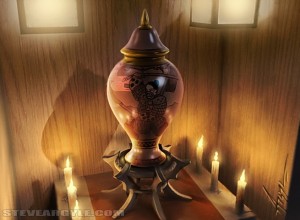 The Jug of Chu Jung, an urn, a relic forged by a god.

Other Lore: (Weaknesses and other things most would not know about the spirit.

-An Excerpt from “Ryu and the Shadow of Shui Khan”, a play written by Danjo Lo, Current Keeper of the Pacified Shadow

“And it is good that one so splendorous as I should finally receive the praise I deserve!”

“And because you are great in so many ways, I have come to challenge you.”

The shadows great vanity and giddiness was suddenly replaced by a swell of pride and anger.

“How dare you, a mere mortal challenge me!  What can you best me at!?”

“I sir, will best you at riddles.

The shadow laughed with a thunderous roar.

“You are a fool, I will take your challenge, let us talk terms then!

“If I win at our duel of riddles you will pass back through that portal to the realm of the spirits to meet your just punishment, and with this weapon I will enforce those terms”

At once the shadow was shocked to hear of such a weapon and his since of curiosity overwhelmed him.

“There is no such weapon mortal!  You lie!”

“Whatever you say spirit, it is so, and it is the very weapon I will unleash on you if you do not honor our agreement.  I will gladly face you in a martial duel if you wish to see proof of this weapon, for with such a fierce ally I, though mortal, shudder not to face you in combat, I will do so, with no fear, in an instant if you wish.”

Then let me see it, and I will decide if it is to be a duel of might or a duel of riddles”

“I will not let you see it until the instant I am to use it, for its power lies in you not knowing what it is.  Thus I have carried this magic urn, into which no man or magic can see, except to physically open the lid and look.  Heavy it has been on my back, and for years I have born it, and not once opened it, for fear someone might see in and warn you of its contents”

The Shadows curiosity and pride now drowned out all his thinking.  Looking down on Ryu and his urn with a dignified look of disdain, he hatched a plan to himself. Then he spoke.

“Of course spirit, name them, for I am anxious to beat you at this game of riddles”

This last barb was very intentional, and the shadows pride filled to overflowing

“When…I defeat you, you must leave and never hunt me again”

“Moreover, you will tell no one, not even the gods anything of what you saw of me, or where I am”

“But they may punish me for such falsehood!”

“Then that punishment will be the price of your failure”

“Then the terms seem even and we can begin”

The shadows sense of greed and superiority finally rose to the top.

“I am a great spirit and you a mere mortal!  For the price, indeed for the honor of facing off with me, I deserve superior terms! Otherwise why should I waste my time defeating a naive like you”

“It seems very unfair to ask more of me if you say I am so lowly and at a disadvantage.”

“When I defeat you, give me that urn and the weapon”

“I cannot do that!  There is only one weapon like this, and if I fail it will be the same weapon used by he who replaces me.  I cannot give you what is not mine”

“Then when I defeat you, you will let me see it!  This is final rat!”

“I am sure my riddles are very vexing” uttered Ryu, as he looked ponderously at the urn, as if considering the compromise.  Meanwhile the shadows curiosity and eagerness to see what was inside the urn was nearly causing him to shake.  He no longer considered Ryu a challenge; he was just a formality that needed to be dealt with to maintain his pride, an easy enemy that must be dispatched before a true victory can be claimed. Finally, with a crestfallen look of doubt, Ryu reluctantly agreed.  The Shadow had his plan.  Once he defeated Ryu he would be able to see the weapon the gods had made to defeat him.  If he lost, which of course he thought he could not, he would simply pretend to honor the agreement and then turn on Ryu when he least expected it and take the Urn!  With great pleasure and trembling excitement, all full of himself, the Shadow pretended to be nonchalant, and uttered.

“Let us begin then.”

For a long time in the dark cavern the Shadow and Ryu traded riddles. The shadow was a master of riddles, so he started out with easy ones to throw Ryu off guard.  For a moment he forgot his curiosity and got caught up in his own skills.  Each of Ryu’s riddles he cracked was like a wave of greedy joy, and soon he was drunk with himself.

Ryu was very good a riddles, but not good enough. After 7 rounds the score was tied, and then the Shadow of Shui Khan crushed Ryu with his best 3, none of which Ryu could answer. Likewise, he easily answered Ryu’s last 3.  The shadow was so caught up in his own magnificence that he didn’t even realize he had won for a moment. Ryu cried out in great disappointment.

“I withdraw myself from this deal!  I will leave in shame and never hunt you, and go punished by the god for keeping secrets from them, but I will not let you see inside!”

The Shadow darkened and cackled

“Whimpering worm!  You thought you could best the Shadow of Shui Khan at riddles!  You act as one with honor but now that I have crushed your legs little bug you whimper for mercy.  You are a rat just as I knew it!”

TWEN CHANG (With great drama, for this is the finale)

With this he hurled Ryu back with a powerful spell and seized on the Urn, flinging upon the lid he looked within and saw nothing, and then let out a confused curse as part of his essence was drawn in, and the weapon… the spell which Chu Jung had placed inside the urn, pacified the spirit and made him docile and helpful, from that point forward forever a loyal ally of Ryu.