The Home Grey's Parents Built in Yunshan. Now they are gone, and Grey must take on the role as lord of Threnody Estate

Nearly a century ago, a small band of elves were among the assemblage of heroes known as the Founders, who defeated Magori, and helped to settle the town of Fanlu.  When offered a reward they asked for a place to call their own.  These elves were wanderers, who for unknown reasons had left their homeland behind and come to Yunshan.  The Brotherhood of the Southern Route, who had claimed Fanlu and the surrounding lands as their own, awarded them a small valley to the North of Fan Lu, to do with as they pleased. Among the elves were Grey’s mother Ryali and Father Aelihir, and Grey’s Father’s Brother Rythin, as well as some others who will come to be known in time.  They named the secluded valley Aetherym, in homage to the homeland of the foreign born elves. 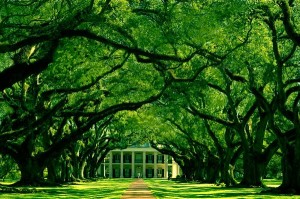 The elves built a large house in Aetherym Valley, Threnody Manor. It was constructed not according to the prevailing architecture in Yunshan, but in the style of a far off land Grey’s parents had once found charming.  The large rectangular shaped manor is ringed by an outdoor porch, with round white pillars that support a second story porch that circles the entire manor as well.  Threnody Manor looks like an old plantation house.

Lay of the Land.

Threnody manor sits in a picturesque valley, surrounded by high mountains on all sides.  The valley floor is mostly flat countryside.  The sides slant up.  They were terraced by Tein’ Ming engineers hundreds of years ago, and have been restored and replanted with rice.  Though the land has been cleared, many ancient trees have been allowed to remain, like shadowy green guardians. Contrary to popular belief, elves do clear land, but when a major feature of natural beauty is found, a compelling rock formation, or an ancient tree, it is left alone to stand as an example of nature’s art.  Such jewels of nature crown Aetherym valley in abundance, three hundred year old oaks, placid ponds, and vine covered rock spurs.  They rise up in the middle of the manor’s fields, and in the elven tradition, the crop rows are artfully curved around them, like the lines in a Zen garden.

Aetherym valley is long and narrow, and roughly L shaped.  It’s about a half mile wide and six miles long, and a few hours travel on foot north of Fanlu.  A small river plunges over a fall at the north side of the valley, and flows out the other end in the east.  This river runs in the spring and summer, and is typically dry in the fall and winter.  There is an advanced irrigation system which allows Threnody’s residents to quickly flood the fields and terraces of the valley during the crucial planting seasons.  This too, is a still functioning relic of the Tein Ming days, preserved for eight hundred years by subtle magics and the care of hardworking farmers who have passed down the secrets of its maintenance for generations.  Threnody’s small river eventually flows from the north end of the valley, then dodges to the east where it leaves. From there it flows alongside the only road into and out of the valley, eventually reaching the Misty Reach. The road eventually meets up with the ancient path that heads north out of Fanlu and on to Bartertown.

Though the years as Grey’s parents lived at Threnody Manor they took in over a dozen families who still live here and tend the land.  The Manor and the valley are considered the property of Grey’s family line, but a large portion of the valley’s bounty is left to these families after the estates expenses have been covered.  All in all the estate is run as a not for profit farming communal, held in trust buy Grey’s family for all time. 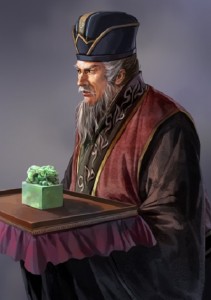 The story of just how Grey’s parents came to take in Old Chang as the manager of their estate has never been fully told.  Old Chang is husband to Chi Na Na, and together they maintain the manor house, it’s surrounding gardens, and manage the estates financial and operational details.  Chang is very old, but spry, and was probably a very young man, maybe even a boy when Grey’s Parents took him in.  He is a very serious, though courteous man. 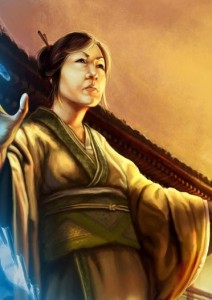 Old Chang’s wife is a feisty woman, younger than him, but still very old.  If Old Chang is a little bit serous and well mannered, Chi Na Na is outspoken, comical, and light hearted.  Chi Na Na is a masterful cook, and an artist in her own right, who crafts beautiful clayware for the estate with a high quality potter’s wheel and oven. 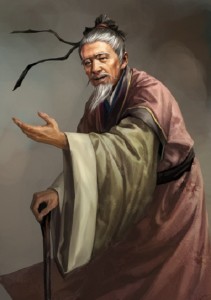 “The sun rises and sets on time each day, the birds sing in tune, and the wind has blown my little grey boy back home to me”Zeshin the Monk

Zeshin was hired by Grey’s parents to train him in scholastic pursuits.  His lessons also included some combat training, which Zeshin had a way of working in to the regular lessons. Zeshin’s training often consisted of long walks through the valley and surrounding mountains.  As Grey grew older, eventually these long hikes turned into overnight treks.  Zeshin would ask grey questions about what they encountered as they went along.  Occasionally, if the answer was especially idiotic, Zeshin would smile broadly and playfully take a swing at Grey, and this would often be the start of a short and painful session of martial arts training. 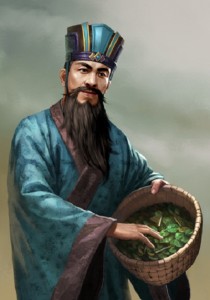 The many farmer families that tend the crops of Threnody Manor look to Lou Shou to be their representative and leader in day to day activities.  Lou Shou’s job as headman is to settle minor disputes, decide when work stops and begins, and make decisions about what to plant and when to harvest.  If there are problems or needs among Threnody’s people, or good news to share, it would likely be Lou Shou who would come to the manor house to let Grey know. 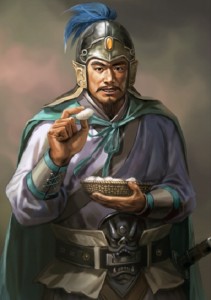 Chin the Day Watchman eagerly presents Grey with a sample of the new crop of cotton the estate has managed to produce.

Chin has lived as a farm hand on the Threnody estate since he was born.  He has now been named as the estate’s watchman, and patrols the perimeter by day.  Given the recent troubles in Littlemountain, the people of Threnody urged Lou Shou to elect one of their number to be a full time protector, free of farming duties to look out for trouble in the valley and be ready to warn others if it should arise.

Chin has been armed with a magic sword and copper mace from Grey’s Parents old things, as well as a magic helm to help him in his watchman duties.  He has never been in a real fight, but has attended a fighting school and has sought out some additional training from Hrothgar 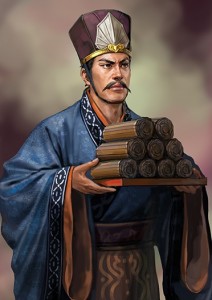 Like Chin, Ling grew up at Threnody tending the fields.  Greys father saw a penitent for numbers and organization in the boy, and offered to send him to accounting school to be paid in full by the estate.  Now he has graduated with honors, and has returned to Threnody to work for a while so he can build his resume.

Ling has brought new accounting techniques to the manor and Old Chang is ecstatic to have a new helper around.  Perhaps he hopes to retire one day and can only do so if he feels he’s found a proper replacement, or perhaps he just wishes to help Ling build up his skills and get an important job in Fanlu. 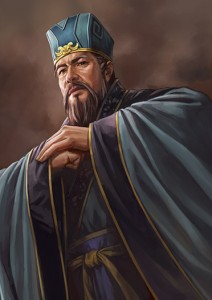 Li Ting humbly thanks Stern for his Life, and Grey for a new place to live, as he presents them both with magical gifts of his making.

For the time being, Grey has taken in the Hat Maker of Littlemountain.  Li Ting was about to be put to death for making magical items for Akiba when Stern intervened in a way Kito was willing to consider. Stern is currently on a quest to find all the magic Li ting made for Akiba.  If he can do this in a year, and see the items are properly disposed of, Kito Taishan will resend the death sentence he has placed upon the Hat Makers head.

A grateful Li Ting has gifted Stern and Grey each with an item of magic, promising to make more for the entire group in time!  Li ting 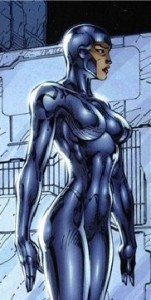 Void is the spirit of the Manor house.  Her skin is a metallic silver, but her face is flesh and very human looking.  Void wears grey colored, slightly see-through robes that reveal the vague outlines of a perfect female body, yet she does not strike those who see her as a sexual being.  She is reserved, calm, aloof and modest. Her openness with her body comes from the mindset of a spirit, not from an effort to draw attention. Void has always been at the call of the Lords of Threnody, but confined to exist within the Manor only. 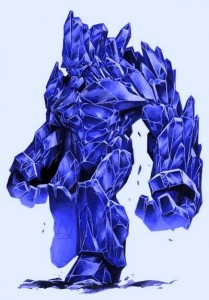 A stunning curiosity dominates the entry foyer at Threnody Manor, a sapphire colored crystal golem in pieces, stands on a dais in mid repair…A work in progress. Neff, as he is called, is intelligent and  bound to Grey. Neff’s personality is slow but good natured.  He does not talk often but always politely greets Grey in a slow and deep voice whenever he enters the room.  Think rock Biter from never ending story, slow but purposeful and good.  Occasionally, due to his state of disrepair, Neff loses his ability to speak, or becomes disoriented and confused, repeating himself or rambling on. Neff looks about halfway done.  He was originally smashed, shipped here. Grey is putting him back together to serve as butler/guardian of the manor.