The Order of the Scroll 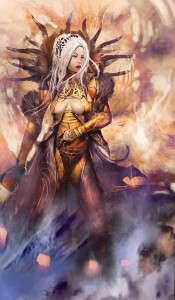 A famous painting of Leoki

Empress Leoki was said to be the greatest arch mage to ever live.  When she was defeated, Yunshan fell into chaos for a time, but then the Shinto Dynasty came to rule the land.  Yunshan was deeply wounded by years of war and uncertainty.  Terrible magic’s and terrible armies had been unleashed, scaring the land and its people.  Even as the Shinto took power, there were many competitors waiting to take it from them.  Those with power wanted to rule Yunshan, but the common people, and the great Temples just wanted things to settle down and get back to normal.

There was a deeper question than just who would be king, it was the question of what type of person should be king.  For centuries wizards had ruled the known world, and the known world was not in good shape.  The lives of millions had been plunged into horror in the rebellion to cast out Leoki.  Now all over the world wizards, each with their pet generals and armies, were fighting over the scraps of the empire.  The common people of all corners of the war torn empire were throwing in behind the arch mage they thought would be the best new ruler, frantically picking sides in a new power struggle. People in the province of Yunshan were different however. They were wondering if wizards should be allowed to rule anymore at all!  In the rebellion, people had seen entire villages disappear in magical flames.  They had seen prisoners loaded into cages by the hundreds and sacrificed mercilessly to power massive, mountain rending spell engines.  Horrible beasts, conjured for the war, still lucked at the edges of society, now out of control and murdering in the countryside.  Strange new diseases like lycanthropy and Fire Bloat were present in the land where they had not been known before.  Soldiers returned home shaken, or driven mad by what they had seen. Everywhere one looked, the magical induced scars of war haunted the land.  The lesson was evident, as priests would heal a single wound, Wizards would incinerate entire battalions. 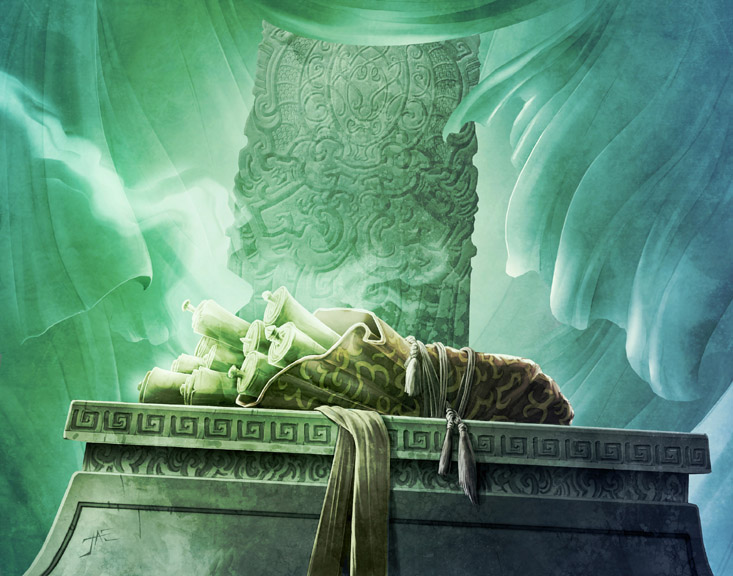 The Order of the Scroll is said to be one of the last orders which still possesses magical secrets from the old Tein Ming tradition of arcane learning.

An anti-wizard sentiment was taking hold and finding voice in strong and charismatic leaders.  This sentiment had already rushed Lord Shinto to power, who was a mere general.  The people liked him.  He was like them, not born of sorcerous blood.  His strength came from a leader’s heart and a powerful ambition, tempered by a wisdom that was rare in that age.  He was a great man, but just a man, and people admired this.  There has always been talk of a distant age when magic was not so great or common, an age when great warrior kings, guided by wise druids, ruled every nation.  People began to want a return to that, they were tired of fire and death.

There were many contenders to rule Yunshan, many great wizards who had fought against Leoki, who were pivotal in her defeat, but the people wanted a warrior king, a hero with a mortal heart and nerves of steel.  The great temples, to the shock of many, and the pleasure of many more, gave their support to Lord Shinto, just such a hero.  The Temples named him king, the people rejoiced.  Even rival generals seemed to lay their ambitions aside when Shinto was given the crown.  One by one they kneeled, swearing loyalty to the new king, and joining their armies to his.  The Wizards who hungered for the crown, and their many orders, withdrew from the contest, waiting, plotting, wondering…

King Shinto moved slowly at first.  He outlawed potions and wands.  Then spells that featured destructive energies like fire and lightning were illegal to cast without the purchase of special writs, even in self-defense!  Rare inks and papers where made illegal or taxed so heavily that spell books and scrolls became increasing hard to make.  Then with the support of the great temples, he ordered the magical orders disbanded, accusing them all of plotting against the crown (this may not have been a hollow accusation).  Bands of warrior monks, priests, and war heroes loyal to Lord Shinto stormed and burned down the guild houses and towers where the magical orders would meet.  The arcane masters of these orders were told, stand aside or be named criminal resisters to the will of the king!  Some of the orders simply left Yunshan for friendlier lands.  Some fought back.  Wizards themselves, and the practice of magic were never outlawed, but everywhere they went, practitioners of the art found themselves watched, taunted, turned away and sometimes even hunted by vigilantes.  A great many practitioners went deep into Yunshan’s mystical wilderness seeking to form protective pacts with the wild spirits and preserve their art.  Eventually these wild, rebellious wizards would take what secrets they could preserve from the great age of magic, and merge it with the spiritual secrets taught to them by the spirits they sought to ally with.  They would develop their own style of magic, establishing what would be known as the wujen tradition. 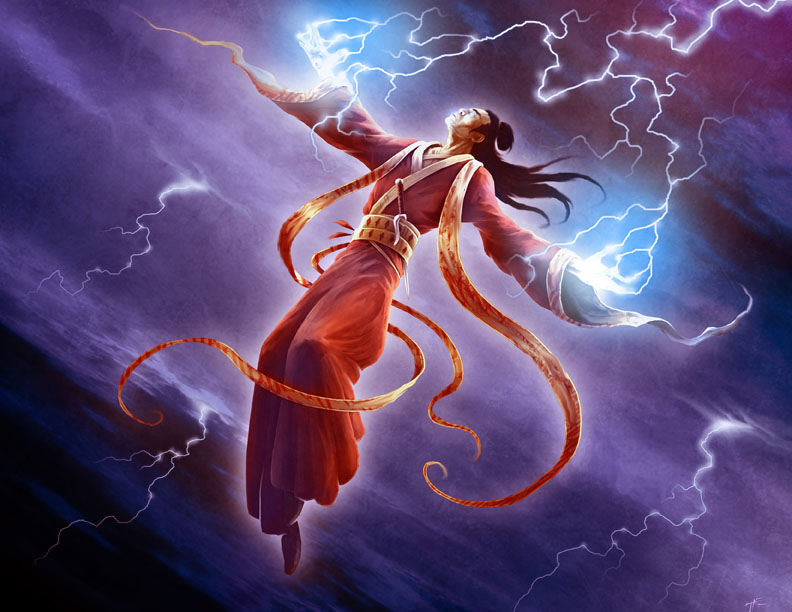 Feng Zhen, one of 4 arch mages who presided over The Circle of the Square, and who founded the Order of the Scrolls.

One order was allowed to remain.  The Hat Makers order. The Hat makers still exist to this day.  They specialize in providing wealthy persons with simple items of magic, usually clothing or household items.  King Shinto and his lords liked their comforts, so the Hat Makers were allowed to continue their wizardry so long as they served the Shinto lords only, and made no destructive items.

The most infamous order to fight back against the king was the Order of the Scrolls, though they were not called that at the time.  At the time, they were known as The Circle of the Square. The wizards of this order were accused of having stolen a set of valuable scrolls from defeated Leoki.  The scrolls were said to empower anyone who would be a ruler.  King Shinto even offered to allow the Order a pass if they gave him the scrolls.  They denied him, and in defiance, changed their name to the Order of the Scrolls!

To this day, the Order of The Scrolls exists in Yunshan, fully intact and untouched.  They’re order holds sway on a massive island in the center of the great central lake.  This island is always shrouded in mist, and has the unique and vexing characteristic, that is seems to completely disappear for long periods of time.  The rumors say it only appears when certain astrological events occur.  Some say there are entire cities on the island, filled with charmed slaves who treat the wizards as living gods. 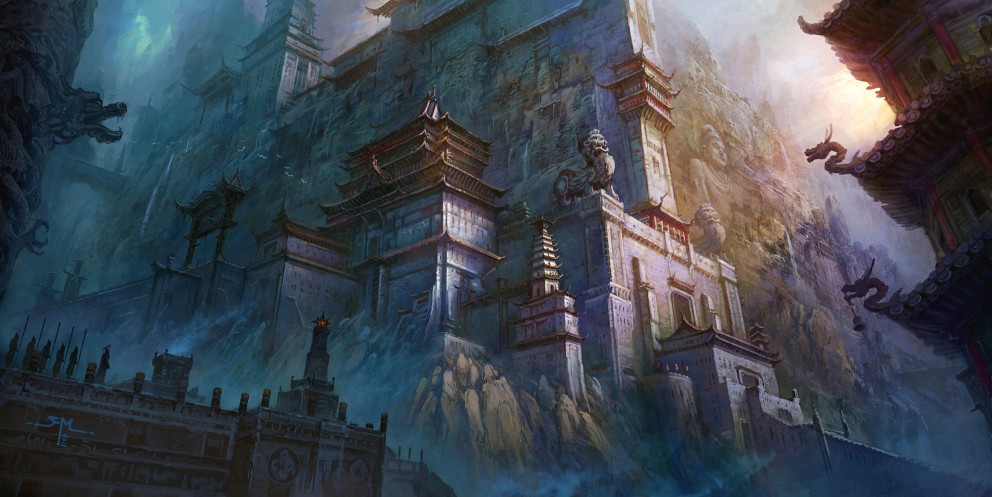 The Great temples have launched crusades against this mystic Island, but all to no avail.  There are tales of wizards of this order suddenly appearing in a lord’s court, or at a crowed festival in a bright flash of light and smoke.  Onlookers stand perplexed as a mysterious stranger sheathed in robes of fire shouts out prophetic warnings in a booming voice like thunder, before mysteriously disappearing.  There are tales of the populations of small villages vanishing overnight which have been blamed on the order.  There are also tales of sudden attacks of magical violence carried out as a demonstration to remind all, that no one is safe from the Mighty Order of the Scrolls!

The order of the scrolls was said to maintain the great magic’s of an ancient age when the Tein Ming Wizards ruled the known world.  There are many tales

-Spells that make use of spirit fire, a substance that acts as normal fire based spells but bypasses energy resistance.

-The Trifold Consequence, a spell that unleashes 3 curses of wish level proportion if its caster is ever killed.

-Spells that can convert large bodies of water to acid

-Magics which come close to the Mythal magics of elves

-Chain incantations, magics that allow a caster to cast two spells at once, combining them into a deadly double spell.

-Arcane based potions of reanimation, that can bring a man back from the dead if administered the day he dies

-The ability to recast spells, powering them by sucking the life force out of nearby enemies

-The ability to cast and ‘hold’ spells which normally can’t be held, and unleash them later at will with but a thought.

-Wands which ordinary soldiers can use.

-The Mountain Sinker, a device that can turn an entire mountain to mud, potentially burying an towns or cities around it.

-Scry-targeters, Mythical devices that allow a wizard to see a far off place, hundreds of miles away if need be, and then blast it with offensive spells with impunity.