All that is Green and Golden, The Story of Caris

Yunshan > Adventurers in Yunshan > All that is Green and Golden, The Story of Caris

In the green and golden depths of the healing house,  many days from the Front, in a quiet little forest village at the heart of the sequoia woodlands of Old Nemeroth.  He was tended to by the Sisters of(XXX), devotees of the Forest goddess Ehlonna.

The strong and compassionate North man met his personal elven angel named Drusilia Ambrodel. Drusilia tended and healed his wounds.  They fell in love, much to the protest of her Elven family and bore a child, Caris.

Although they never married, their love seemed almost charmed and her parents were both present in her life. With the war over, mostly, Cei stayed on in the village to protect it, his new family and the surrounding woodlands.  Caris learned joy and faith in her goddess as well as knowledge of herbs and plants, appreciation of art and nature from her mother, and a skill and dexterity of fighting as well as a zest for life from her father.

A bit of a tomboy she grew up strong and proud, in spite of the troubles her half blood caused her among the elf and human races.  Her father tought her what he knew of the brutal way of hand to hand combat, her mother schooled her in the majestic art of archery.

Caris’s father chose her first and middle name.  It was the name of his sister who died during childhood.  Caris kept her mother’s maiden name since her parents didn’t marry.

As a child, Caris exhibited signs of great divine abilities.  She especially was able to connect with the animals of the forest.  She also found that she could heal the animals as well as plants that were damaged.  She even healed her childhood friend, Tianna, when she fell on a forest outing and punctured her hand.

Caris suffered the loss of both of her parents during the turmoil during the Second Nemesis War.  Caris was only 17 at the time and the church took her in to care for her and further her training as a cleric.  Although Caris embraces the ideology of her goddess, she is a rebel and continuously questioned and debated the teachings and structure of the church.  Eventually, the clergy leaders informed her that after much deliberation they have come to believe that her path was one diverging from the mainstream teachings and that she should venture out to find her true peace and meaning with their blessing. 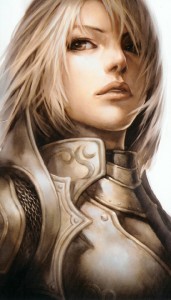