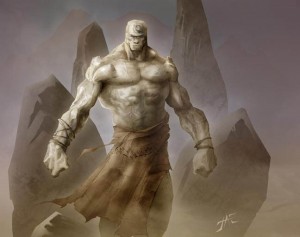 A towering dome of rock rises at Fanlu’s southwestern edge, Old Black Stripe it is called, named for a massive vein of volcanic glass that runs diagonal up its height.  For ages this rock dome has been held sacred by all who have lived in its shadow, for within its heart and beneath its weight sleeps a force of living nature, a spirit of power.  He is Fang Quiang!  The dreaming mountain, the watching stone, Old Black Stripe!

You really know only one thing about Fang Quiang’s powers.  Like the Howling Winds, he has control over magic in his dominion.  No one in Fanlu or its immediate area can cast a spell greater than 1st level without Fang Quiang Knowing, and anyone who does cast such a spell is expected to make an offering to Fang Quiang first.  This requires 1 full round action per spell level, as well as a sacrifice worth 1 gp/ level.  The offering is made in dramatic fashion, meaning the spell cannot be cast covertly or on the sly.   Anyone who ignores this, even for a good reason, has a significant chance of angering Fang Quiang, who will then shut down the disrespectful spell caster’s ability to cast spells above first level anywhere in his dominion!  This is a powerful curse, and reversing it would no doubt require some great sacrifice. You know all of this, because it was one of the first things Evon warned you about when you came to Fanlu. Fang Quiang’s other powers are unknown, though they must be on par with other great spirits you’ve encountered such as The Howling Winds, and the Light in the Wind.

Fang Quiang is a Spirit of nature. His motives are beyond human comprehension for the most part, but there is one quality spirits possess that all humans understand.  Whether great or small, all spirits are protective of their dominions.  Fang Quiang watches over Fanlu.  How he does this is left to the imagination of the town’s people, who burn offerings to him daily, grateful to have such a mighty protector.  Fang Quiang has a distant, but somewhat fatherly relationship with the People of Fanlu.  He is said to be strict and unyielding, like the stone he is born of, yet endlessly patient when it comes to children.

-Fang Quiang delivered a prophetic message to Hrothgar to go to Littlemountian.  The message was from the god Chu Jung. Does this mean the two are allies?  As of now you know very little about the rules and alliances that govern the world of mighty spirits and Yunshan’s gods, the 8 Celestial Governors.

-The Night Watchman, who is rumored to be the only person who has a direct line with Fang Quiang

For ages Fang Quiang has slept beneath the mountain, they say dreaming always of good things, and his dreams are so powerful that they bless those who live in Fanlu with good luck.  A local saying in the town when one has just had a fortunate event: “The dreaming mountain dreams of me”  They say also he has visited mortals who protect the town through their dreams, to warn them of some approaching danger.  The people of Fanlu claim that if a great danger where to fall upon the town, Fang Quiang would awaken, and protect them as an unbreakable hero of living stone!  Some of Fanlu’s oldest claim they have seen it happen with their own eyes.

-Fang Quiang’s focus, the thing which binds his power to the land, is inside the obsidian stripe that gave Old Black Strip its name.  Only Fanlu’s Night Watchman knows how to reach it, and the towns folk whisper that each night just before dawn, he climbs an invisible staircase high up to the rock face, and passes into it to share his night’s findings with the old spirit.

+2 luck bonus to all skill checks for those who are in his domain and have his blessing.

Can detect the use of magic throughout his domain and takes offense at those who use magic above 1st level without making an offering.