The Winds of Life and Death 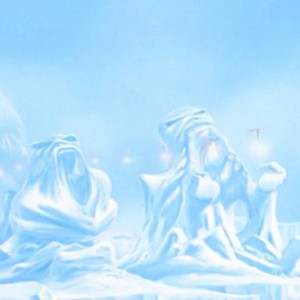 This powerful spirit, as it’s name suggests, is actually several spirits that speak with one voice, and act with one purpose.  These are the cold winds which blow down from the north and play across Yunshan’s western mountains, blanketing them in dense snow each winter.  The howling Winds are one of the truely god like powers in Yunshan, and the territory they influence is vast.

Who can know what the Howling Winds want. In the spring, summer, and autumn, they re one of the spirits most likely to ignore offerings, and ignore great offenses.  They are simply aloof and rarely interact directly with the world.  In the winter, the reverse is true.  No one dares travel across the western ranges of Yunshan without making costly offerings to them, and no one dares make a move which would offend them.

-Many spirits who also live in their realm are subservient to them in some way.  The Light in the Wind is one such spirit, though legends say he bows down to the Howling Winds begrudgingly.  Each summer he rebels, sending terrible thunder storms across the mountains, only to be silenced and subdued each winter by the unstoppable power of the Howling Winds.

-The Ghostface Hobgoblins praise the Howling Winds as a god, and make great offerings to them on the cusp of each winter, hoping to avoid the worst of their wrath.

-The Light in the Wind is both ally and rival

-Lao Zheng.  The Howling Winds Hate Lao Zheng, most believe because he harbors undead in his stronghold, which is right at the edge of the Howling Winds reach, as if to taunt and annoy them.

-The Howling Winds particularly hate the undead, and can sense their presence.  In winter, the Howling Winds have been known to unleash terrible storms,  in protest of some undead being taking root in their territory.  Most undead are not phased by cold and weather, so these acts of nature’s rage are more of a temper tantrum than a solution, and are more likely to hurt the living in the given area!  The Howling Winds can keep these relentless storms up year round, visiting icy wrath upon a small region in their area of influence until some mortal hero steps up to destroy the undead menace.

-The Wujen Lao Zheng makes wild boasts that he destroyed one of the Howling Winds and claimed a part of their domain for himself.  High on a mountain, where the slain spirit once resided, he built his cold city of the dead, welcoming all Gaki to live there in peace if only they will serve him.  This is a wild boast that most good priests pass off as an impossible lie, but most wu jen believe it, and fear Lao Zheng!

-Ability to suppress all magic above 1st level

-Ability to bring back the dead!

-Howling Winds can certainly bring a storm down on those it despises, more specific consequences are unknown