The Light in the Wind

The Rage of Summer in the Western Skies 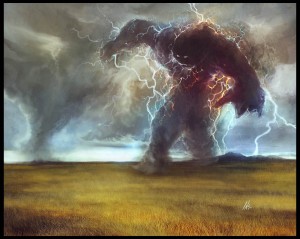 The Light in the wind was the spirit you faced that one time.

It goes without saying that the Light in the Wind can throw some of the meanest lightning bolts man will ever witness, and rains them liberally upon his enemies.  Like all great nature spirits he is very difficult to damage with mundane weapons.  The Light in the wind cannot suppress magic in his domain like the truly great spirits can, but he is a spell eater, able to pull any spells of 4th level or below into himself, swallowing them harmlessly!

The Light in the wind watches over the people of Littlemountain, as well as many other small settlements that sit at the eastern edge of the Howling Winds territory.  He seems to have a soft spot for these isolated mountain towns. Legends abound of him stopping forrest fires and raiders alike.  To the contrary, he seems to care little for larger settlements, where he is not really praised very much anyways.

-Those who live in the Shadowcrag Range praise the Light in the Wind as a protector.

-The Light in the Wind hates that he is subservient to the Howling Winds, and rebels against them each summer.  Locals speak of the summer lightning storms of Yunshans western mountains as the sign of battle between the two great spirits.  In the summer, the Light in the Wind is temporarily stronger, but each winter, as the thunderstorms silence and give way to snow, he is said to be once again defeated, and put under the rule of the Howling Winds

The Light in the Wind was somehow dispatched by Akiba and his allies in order to gain passage though the mountains to take over Littlemountain.  All great nature spirits are immortal, and eventually return again after being destroyed, but the act bought Akiba time.  Also, Akiba deliberatly desecrated the Light in the Wind’s Focus, which insured when he reformed, he would do so as an aimless, angry force of nature.  Only with the help of your group and Kito, was Yoshu two rivers able to re-pacify the Light in the wind, restoring his focus and his sanity

The Blasted Point, a sacred rock formation high on a mountain plateau about a day and a half west of Littlemountain.

-Can control the weather

-Can “eat” spells of 4th level and below!