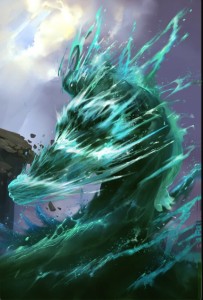 This is the first spirit Grey and his party encountered upon entering Yunshan.  What ensued was the fight of their lives.  In a narrow pass, in knee deep water that constantly threatened to sweep them away, they fought the merciless, living wave that is Old Narrows.  This was also the first appearance of Yooshu Two Rivers.  Without his help the group might have met their end, and later that night, without the groups help, Yooshu might have met his, But that, is another story!

Impossible to harm with mundane weapons, highly resistant to magic.

-Old Narrows is a threat to those who travel along the Stone Shadow Pass during flash floods.  The house of pacified shadows is always having to deal with him

-Old Narrows is a seasonal spirit of sorts.  Some spirits can only manifest a physical form during certain days of events.  Old narrows only appears when the river that flows beneath the Stone Shadow Pass overflows its banks.