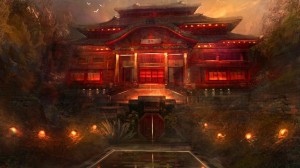 Redtown is the western part of Fanlu, high up on the hill where the Oldtrade Road heads out of town and down the Stone Shadow Pass, eventually Reaching Otto.  This part of Town was originally divided up into large parcels and gifted to The Founders for their part in clearing out the Ruins of Lei Kun.  Over time, many of the Founders 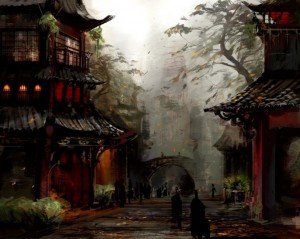 Founder’s Way, one of Redtown’s main roads. Most of the buildings in Redtown are painted deep red with black, grey, and blue trims.

moved on.  One man, a Founder himself, sought to buy more of Redtown at every chance.  This man, or rather half elf, is Evon, and some of the locals refer to him as the Lord of Redtown, because he does indeed own most of it.  Hundreds of souls call Redtown their home, so Evon collects quite a bit of rent, and is rumored to be the richest man in Fanlu.  Redtown has a small fortified wall 12ft high around it, not the sort of wall that would stop siege engines, but certainly the type of wall that would slow down foot soldiers.  Redtown has its own shops, artisans, and wells. There’s a sizable public garden that The Lord of Redtown has built. Evon allows any citizen of Redtown to claim a plot and grow food there for themselves so long as they keep the plot well cared for.  Many joke that if Redtown were to close its two gates, it would be a self-sufficient town. All the woodwork In Redtown is painted red, with trims in Greys and blues, giving it its name.