Grey turns just a bit as he calls back to you all, and as he turns back, that’s when you all see him, like a wall of stone blocking the path that leads off of the Founders Watch and up the mountain. What is strange is, it’s not like he just appeared, it’s more like he was standing their the whole time, out in the open but somehow unseen…nor does his sudden appearance startle your senses…it’s as if you knew he was there the whole time, recognized by your senses, but not by your eyes. None of this makes sense, but this is Yunshan, and you are in the presence of a powerful spirit. It’s almost as if Grey’s last word just brought him to your senses.

In Truth, it is just his leg that blocks the path. He towers 40 ft. high, one stony foot and rocky calve blocking the narrow path forward. His other leg, and indeed the left half of his towering body is phased into the cliff face. His eyes are like cooling embers, black, with the slightest halo of orange, more a shadow or warm color than a light. His features are grey like the mist, but the massive vein of obsidian that runs across his body from shoulder to groin, shines with a dark reflective gleaming. 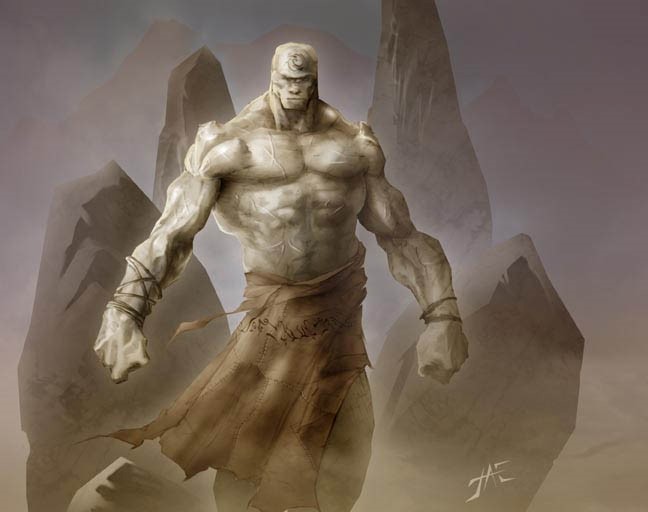 Look at the picture, imagine the obsidian stripe across the body. The tallest among you barely comes up to below his knee cap. One massive leg standing on the trail, the other lost in the sheer stone wall that shoots upward. His face looks down, head cocked like that of a curious animal, which seems like a curious kind of expression for such an imposing being to have.

Meela Bows Deeply, and in a voice that seems too alive, too exasperated and wonder-struck to come from a ghost says

It seems the mountain has come to us.