The axe wielder observers you with an iron stare, axe in one hand, chain in the other.

Meela speaks back to you in quite tones
“This is a caravan, they’re about to head down to the market below the city, I doubt they want any trouble from us”

You can hear deep throaty shouts and guttural complaints from the mists as some unseen group does whatever it is they are doing for about a minute. All through out the rattle of chains, the shifting and securing of equipment, and deep, strangely chitinous sounds, then a call, the voice of that 2nd creature you think.

“Ready, lead on with no delay!”

With one last nod the axe wielder acknowledges your group, never taking his eyes off you. He slowly walks forward, but as he does, with each step, he also descends downward into the ground, as if treading down some unseen staircase. Then, lumbering from the mist come 6 behemoths, men with giant scorpian like lower bodies that creak as they shamble forward. Each bears arms, and a heavy load of sealed crates and chests upon it’s back, they are both caravan guard and beast of burden in one. 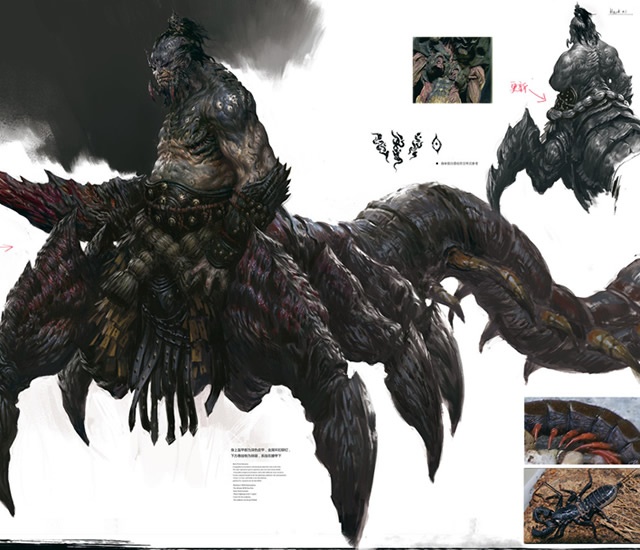 The axe wielder has now completely descended below the ground, in a moment he’ll be somewhere deep below and behind you, but the chain he held in his off hand stretches behind him and up out of the ground, and each of the beasts is connected to it by a clamp on it’s belt. They eye you with otherworldly suspicion, and a very recognizable, almost human kind of curiosity as they too descend into the earth before you. It’s probably obvious to them you’ve never seen anything like this, it’s obvious to you, some of them have never seen mortals this close and in the flesh. Last comes the merchant himself, the shifty, reptile bodied being. His darty nervous eyes seem to move between you all with spastic frequency until the very moment they vanish beneath the ground about 40ft ahead. You all stand in silence